In casual conversation, I've brought up the fact that James Dobson help found eharmony and that as a result, eharmony is run using his evangelical social principles. I will not go as far as saying it is a Christian dating service, but I will say that eharmony deliberately excludes gays. Nobody ever believes me.

eharmony discriminates in the beginning. When you join, you are offered two options, man seeking a woman or woman seeking a man. 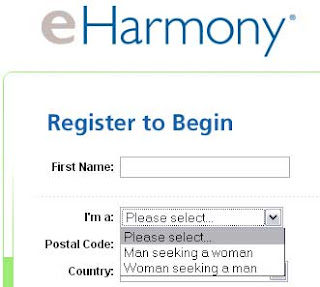 eharmony is all about social engineering, by excluding gays they deliberately seek to devalue the lives of gays Americans. People notice this kind of hate, and they sue.

...on Thursday, she [Linda Carlson] filed suit in Los Angeles accusing eHarmony of violating a California law that prohibits businesses from discriminating based on sexual orientation.

I chuckled when I read E-Harmony's response:

...He said the law prohibits only arbitrary discrimination that lacks a legitimate business purpose.

eharmony does not end its discrimination with gays, there are religious tests too, but they are less prohibitive. Eharmony's 436-question test asks your religion and religious preferences in several places. I filled out a profile while writing this post (to the chagrin of my wife) - and yes, religion is an important part of the onboarding process. Some Atheists have experienced problems using eharmony; the problems pale in comparison to outright exclusion.

I'll post a few of my eharmony matches if I get any. After all, how attractive can a tall (6'2"), well paid, healthy, intelligent, well educated, outgoing, caring, compassionate, Atheist be? It is a good thing they did not ask my weight.

I completely agree. If it's any consolation, I don't believe that behavioral style profiles can really be used to find your perfect love partner anyway. The best use is to use them to learn how to communicate more effectively with someone who has different behavioral style preferences than you do.

Would you also conclude that Gay.com's Online Personals (PlanetOut.com) is deliberately trying to devalue the relationships of straight people when they post on their website:

PlanetOut actually states that they "exclusively" cater to only the groups above. Your thoughts?

great question - I do not see a problem with eharmony or gay.com offering services for an exclusive community. The difference is that Gay.com advertises its services as a dating services for lesbian, gay, bisexual and transgender people, while eharmony advertises its services to what it sees as the "normal" population - and this is the real problem. eharmony can address the problem by changing its marketing approach. Of course, they would not even consider doing so without the pressure of a lawsuit.

I think the lawsuit will be found to be without merit if it goes to court. However, I do not think it will get that far. That is unless the evangelical forces behind eharmony refuse to budge from its core normalcy message.

Sorry Mojoey, but I don't see anything in eHarmony's advertising that says your not "Normal" if you are gay/lesbian/bi. All I see is men and women hooking up. They are advertising to their target market. I don't think there's anything wrong with it. As a straight person I'm not offended by marketing that targets gay and lesbians. I don't feel like they are saying I'm not normal. It's marketing. That's what it is all about.

For the record, I think the lawsuit is ridiculus. As you pointed out, there are dating services that are specifically geared for gays and lesbians. If I were to try to sue them, I would be laughed out of court. I think it's a double standared.

It's a basic moral issue. God created Adam and Eve to MARRY and procreate. It is totally impossible for this to happen with Adam and Steve instead of Adam and Eve. It has been like that since the earth was created. Just because you want to choose to have homosexual relationships doesn't make it normal, it's not. Heaven, hell?? Right wrong?? It's all our choice.
J.B