The world would be a dull place... 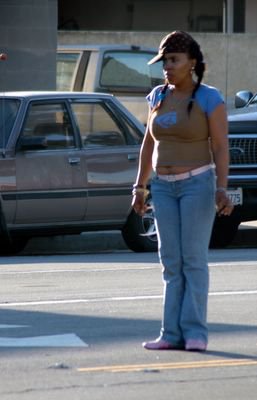 I stopped for coffee on the way to work this morning. I saw this crackhead playing chicken with the dockworkers as they drove to the port of Long Beach. I actually tried to stop and help her - my mistake, she tried to spit on me and the others who tried to help.

Sunglasses at the mall 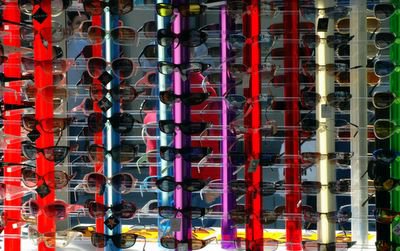 I came across this colorful scene while looking for fish tacos at the Mall of Orange.

Sunglasses at the mall
2005-10-31T13:36:00-08:00
Mojoey
Comments
Email ThisBlogThis!Share to TwitterShare to FacebookShare to Pinterest

My wife and I have a running joke about serial killers. They always have their totally obvious "Murder Vans". Take this van for example. When was the last time there was a rattle snake in Cerritos? I am willing to bet that if the cops pulled this guy over, in the back of his van they would find plastic sheeting, duct tape, Clorox, a hack saw, and maybe some rope.
Posted by Mojoey at 11:05 AM

3 comments:
Email ThisBlogThis!Share to TwitterShare to FacebookShare to Pinterest

LGF has an update on the fourth consecutive night of Muslim led riots in an immigrant suburb of Paris, Clichy-sous-Bois. I can remember visiting this area in search of flea markets a few years only to be scared out of my wits by inner city / high crime feel of the place. After reading the LGF post, I jumped out to read something from media sources. I read about a dozen newspapers interpretation of the events only to find no mention of the word ‘Muslim’
Posted by Mojoey at 10:43 AM

I tend to forget how distasteful thinking about Michael Behe is for me. I go for months without thinking about the religious pap he panders to the uneducated public. Every few months Behe rears his furry head in a public forum to express his religious beliefs again, but always his beliefs are clothed in pseudoscience. Take his latest effort, he just completed three unsuccessful days trying to convince a judge that his pet theory, Intelligent Design, was in fact good science. I don’t think he convinced anybody (other than those already blinded by faith).

The meta story behind Behe is telling: A Christian becomes a biology scientist and then discovers that science conflicts with his supernatural belief structures – He concocts a cover story that is un-provable and un-testable. He backs his cover story with NO peer review, yet still claims it is science. He does not speak up until after he cannot be fired – he stands alone defending theory-that-is-not-a-theory against the scientific community while claiming to be a intellectual revolutionary fighting against the establishment.

Behe is actually intellectually dishonest – his theory is a religion. His aim is to dumb down our students with his own version of biblical creation. I am sure there would be a special place in hell for this man…. if I believed in hell that is. Failing hell, can we please just bend the rules some and fire him? He should not be teaching. His own colleagues at Lehigh University think him a fool - they have publicly distanced themselves for his Intelligent Design and Michael Behe.

How did Behe’s testimony go in Harrisburg – reporters and bloggers tell of three days of testimony where Behe was shown to have adapted a older discredited creationists message to become the New Intelligent Design theory. Behe was forced to admit the his work had never been peer reviewed and that it could not pass even a cursory scientific test. It was apparent that Behe took his belief in God and developed a theory that he could apply to science based on the assumption that God was in the creation process. Of course – his work is fiction, maybe it should be taught as such.

My atheist friends will wonder why this issue does not bother me. Just because Starbucks stirs things up with a God quote on cups, does not mean that I must boycott Starbucks. Starbucks is not making a faith based statement (like In-N-Out Burger), they are instead trying to provide inspiration for the "Average Joe" from our rich cultural heritage.

“My only regret about being gay is that I repressed it for so long. I surrendered my youth to the people I feared when I could have been out there loving someone. Don’t make that mistake yourself. Life’s too [expletive] short.”

Baylor freaked out and pulled all the offending cups from their Starbucks store – apparently, there are no Gays in Waco, Texas.
I find Chuck Curries’s attitude toward the Baylor debacle refreshing, but I am more inclined to support McSweene's view of the subject.

Do I care that Starbucks will make a god reference on a future coffee cup? Hell no, Starbucks, you go right ahead and print whatever you like. I’ve ate a thousand In-N-Out burgers and never once read their subliminal bible passage.
Posted by Mojoey at 10:59 AM

2 comments:
Email ThisBlogThis!Share to TwitterShare to FacebookShare to Pinterest
Labels: Only in Texas

I know at least one of my friends will take me to task for this, but 16 kids! Why would anybody ever do something like this in this day and age? I guess it is no surprise that the mother and family are from Arkansas. This type of behavior is the equivalent of driving a school bus size SUV – it’s massive over consumption. My guess is that if you dig deep enough, you will find a fundie.

I'm not sure if I should categorize them as Nutballs - oh, what the heck, their website points to a creation science link, that is enough by itself. I hereby deem them Nutballs.

oh - and why the heck do the Duggers’ name all their kids with first names that start with a "J" – it must be a Jesus reference, how obvious.
Posted by Mojoey at 1:55 PM

Sometimes I find it funny to read the news. Take this article for example, New Orleans is worried about its residents not returning after Katrina. It’s kind of late for this kind of whining isn't it? New Orleans (the government anyway) did it's best to kill off the local resident population by its mismanagement of the disaster recovery efforts. Why would residents ever want to come back?
Posted by Mojoey at 1:52 PM 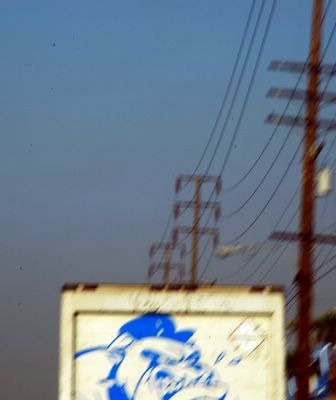 I asked this question of my wife this morning. She said "it's out of focus". I told her I did that on purpose - I was trying to make this picture look this way because I was trying to shoot something a little artsy instead of my usual documentary style. She gave me one of her smiles.

My son liked it. He thought it disturbing, you?
Posted by Mojoey at 8:12 AM

Sticker Graffiti in the Central Valley #2 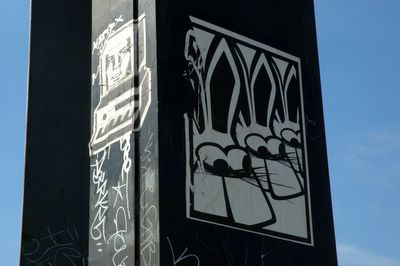 Sticker graffiti in the Central Valley #1 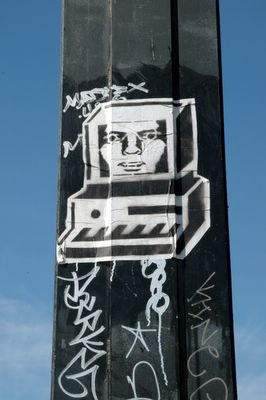 Along I-5 in California's Central Valley there is a place to stop, eat, and refill your tank. It smells like cow shit - the air burns your nostrils. Yet some enterprising graffiti artist braved it all to display his skills to a few hundred cars a day. 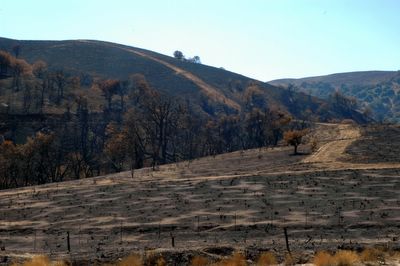 I drove up I-5 to Sacramento today. In the mountains north of Los Angeles, the hillsides have all been consumed by fire. It is a depressing sight.
Posted by Mojoey at 10:13 PM