Our comic books too? 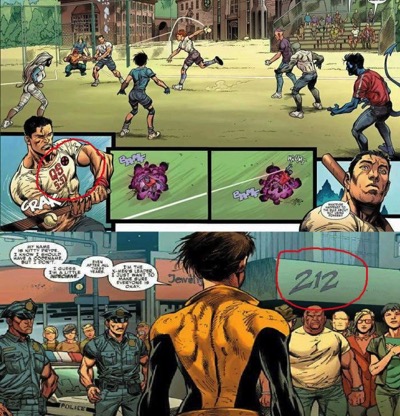 According the the Independent, the comic book contains numerous reference to Indonesian protests against the Christian governor of Jakarta, Basuki Tjahaja Purnama.

I think the Independent got it wrong though. They characterize the protests as Indonesian when they should say Indonesian hard-line muslim protests. They don’t like the mayor because he’s a Christian. Seems a little bigoted and anti-democratic to me.

I found this Christian screed glued to a light pole near the Cerritos Promenade. Apparently, God said God love you very… 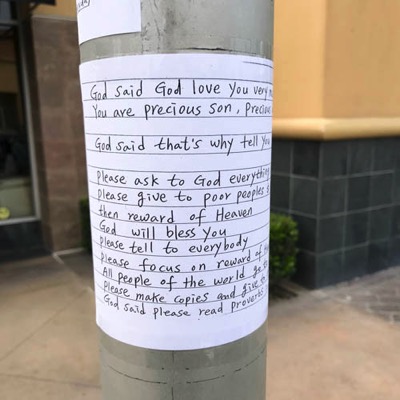 I found two new news sources this morning. One is a post on Reddit about the arrest of 33 clergy over the past month. I had read most of these stories by other means, but it was nice to find them all listed in one place. The other source was also on Reddit; a subreddit called r/Pastor/Arrested. It’s a frightening collection of hypocrites.

Toledo, Ohio. Pastors Cordell Jenkins and Anthony Hayens were taken into custody by the FBI for recruiting, enticing, harboring and transporting younger than 18 for commercial sex acts. Basically, the pastors were pimps and their victims were underage girls.

The Life and Time son Bruce Gerencser, an excellent blog by the way, has the full story.

Pastor Jenkins stands accused of the repeated violation of a girl, starting when she was just 14 years old. He allegedly turned the child into a prostitute and used threats to keep her in line.

According to that document, Mr. Jenkins took the girl, identified by the FBI as Juvenile No. 1, to a Red Roof Inn in Toledo on “at least two occasions,” including once after Mr. Jenkins had pressured the girl to find an acquaintance for a shared sexual act and she complied. Source: Toledo Pastor, 2nd man accused of sex with teen.

One aspect of this case that I find repeats itself in other stories of clergy sexual abuse is the “church as a business” where unqualified people open churches like the Abundant Life Ministry, and then assume the mantle of legitimacy which they then use to exploit others. In this case, children.
Posted by Mojoey at 10:47 AM

Youth pastor Charlie Mabern Hamrick (54) was arrested and charged with over 40 counts of capital sexual abuse of children under the age of 12 and other heinous charges. The abuse spanned decades. Hamrick was a youth pastor at Pine Forest United Methodist Church in Pensacola, lead a youth group as a volunteer at Harvest Christian Center in Cantonment and was a football coach at Tate High School in Pensacola.

The stories of his abuse are disturbing… 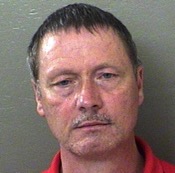 There is a thread of religious enablement in the stories too. Apparently the abuse was reported when Hamrick was caught in the act of abuse and the church promised he would not work with children again.

I’m thinking Flynn will end up in prison. Sessions will resign. Nunes will go down in flames at his next election. I’m not sure about Manafort.

My old friend Dr. Louie Savva of everythingispointless.com turned me on to his new podcast, The Existential Files. I listen to a few episodes this morning. I like it. I thought you might too. Enjoy.

Episode #35 with Yannick Jacob, the programme leader for the MSc Coaching Psychology at UEL and he also teaches and lectures on the topics of existentialism, coaching, mediation and positive psychology.

At one point he may been a man of God

My most favorite hypocritical Christian comment ever… “at one point he may have been a man of God.”

Pastor Wade David of the historically black church, Munger Avenue Baptist Church in Dallas, was arrested for theft of up to $500k. He allegedly used the funds to fund his lifestyle. Although there are no allegations of hookers and blow, but there are allegations of planned hotel room stays and… alcohol. The money was earmarked for helping addicts and the needy. The church is broke.