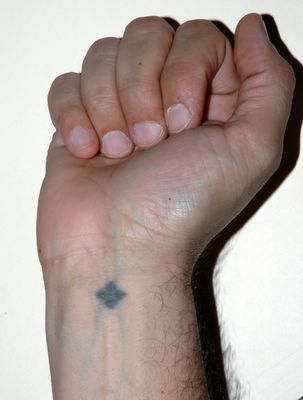 This is a picture of a Coptic Cross Tattoo on the wrist of a friend of mine named Paul. Paul got this tattoo at the age of 13 while living in Egypt. It is a sign of pride and defiance given by the Coptic Orthodox Church and worn by its members in a predominantly Islamic county. Apparently, getting caught with this tattoo guarantees the bearer harsher treatment by the government. Coptic Christians have been getting this tattoo for generations, and although Paul’s tattoo is old and faded, at one time it was a vibrant depiction of the Coptic Cross. Paul mentioned that a few generations ago, Coptic Christians would get this same tattoo on their foreheads. I found a picture here.

Paul and I talked about the brutal murder of Egyptian born Coptic Christian Hossam Armanious and his family a few days ago. Paul said something that chilled my bones; “Stuff like this happens everyday in Egypt, and is happening now in Dalfur. Nobody cares."

I’ve posted on the Armanious murder here and here. The latest news release says that the killers did not deface Coptic Christian artifacts nor did they deface their tattoos. There is some hope that this was not a hate crime.

should be interesting to see how this pans out. my gut is that this was a jihad-muder. The jihadists these days are not stupid..they can and often do make their assaults look like non-hate crimes. I could be totlaly wrong in this as well. The timing could be coiencidenatal(sp sorry) but since i do not believe in that......

Nice tattoo !!! Do you dare to post it on toovote.com ???
Regards

Also in the old days, children were tattooed with the cross, so that if they were kidnapped or forced to convert, People would know they were from a christian family.

I would like to get a tattoo like this one, but I can't find a design for it. Anyone have any ideas?

Tattoos like that are really simple. It is essentially a plus sign with short lines intersecting each end. Mine only took about 30 seconds for the artist to do...just watch out for minimum charges (it sucks to pay $50 for 30 seconds worth of work).

BTW, I absolutely love that such a simple tattoo can represent so much (faith, solidarity, defiance...)

I am proud to wear mine upon my arm.
It represents Freedom from oppression and lets the world know i am defiant.
Although this one shown is small (not a bad thing) it is a show of faith & the bigger the better.
Mine covers my entire forearm & I display it with pride.
I have had many jobs were they have suggested I cover it up but I continue to refuse ^ answer with "if i must cover up then you may not wear a cross to work either"

Never had a problem & my muslim freinds are proud to be around me even tho I have this!
It is a new world & I love my active resistance.

Display yours with pride brother

Although I am not of the Coptic Orthodox Church, I am a Christian and admire the pride, faith, courage, etc. the tattoo represents. Does anyone know if it is frowned upon for non-Coptic Christians to have this tattoo placed on their wrist? Thank you!!

bishoi said...
This comment has been removed by the author.
7:07 PM

you can were this cross for coptic or non coptic it is the pride of my country and religon if you want to were it just go to coptic monisteries and they give it for free!!!!! if you are not coptic you may get the roman catholic cross or a greek cross or a normal cross but it is alot of the time unusaul for uncoptic people to wear it
I LOVE MY COPTIC ORTHODOX CROSS AND MY COPTIC RELIGION

Celtic cross tattoo, a symbol of circle around the intersection of cross, seems to have closer meaning to that Christianity holds. While the circle represents the eternity, the cross depicts the infinity of God’s love.

I Am Coptic, and im 13, im getting the Coptic Cross, on my wrist for my 14th birthday. My mum also has one she got hers when she was a child because in the coptic countries the Musilims used to dis the coptics. Im not getting mine because of that, but because it will just show that, i have deticated my life to God, and i want to follow in his path.

I think this is a fascinating way to show your Christian faith. I am not criticizing the practice by asking this, I am only curious, I’m a Confessional Lutheran and my denomination seriously frowns upon any tattoo and a tattoo of a cross would be particularly taboo, the church explains the reason given by our church for the prohibition is that it is due to Leviticus 19:28 “Ye shall not make any cuttings in your flesh for the dead, nor print any marks upon you: I am the Lord.”, they also say we cannot pierce or mark our bodies because we don’t truly own them, that our bodies belong to God and are only in loan to us from God as a temporary vehicle that is required for us to interact in the temporary reality of the material realm. Does the Coptic Church permit this due to a different interpretation of the text or is there additional scripture in the extra books found in the Orthodox bible that isn’t in Protestant versions that provides exceptions to the commandment in Leviticus? Please know I don’t intend any offence. Being from another denomination I know almost nothing about the Coptic Church and its customs and I am hoping to learn. I’m not judging the Coptic Church or its practices, or any of you who wear the tattoo. From what little I know about the Coptic Church, I find its rituals and symbolism to be absolutely fascinating and beautiful and I can truly feel the holiness and presence of God within them. Thanks so much. God Bless you my fellow Christian brothers.

Why are ribs hard to tattoo
Once largely taciturn for hoopla veterans who could bucket out the pain, the costa aviary has get early true station wagon — for man and ladies. “It’s the hottest site on the substance upright now,” above-mentioned Ryan Hewell, mastery of Big Easy Tattoo and Piercing in Broomfield.

This hang on where you dwell. At this tempo, there’s no federal justice in the United States that curdle the seniority when a personify can get a mark. Even though each pomp can become their own empire, in most possession, when a less gain the date of 18, they’re estimate legally an Nestor and can constrain their own resolution around obtainal a mark. A few quality claim a tone from a mother or warden if the provoke is less than 18 ages obsolete. In other quality, the mother or tutor must type a admit configuration and be instant while the affict gotta mark.
http://krishtattoo.com