Photography, it’s all about practice

When I was a young man I played basketball for my high school team. My takeaway from the experience was that I learned how to practice in order to achieve better results. I practiced the release for my jump shot over a thousand times a day, every day. It hurt and was boring, but it was necessary if I wanted to improve. I gave up playing in pickup games in order to get my practice in. I went from not having a jump shot, to having a damn good one, but it took a long time. The same principle applies to photography. I practice the things I need to master so that when need arises I can capture the moment. The shot below is a practice shot. I shot 40 of these today. 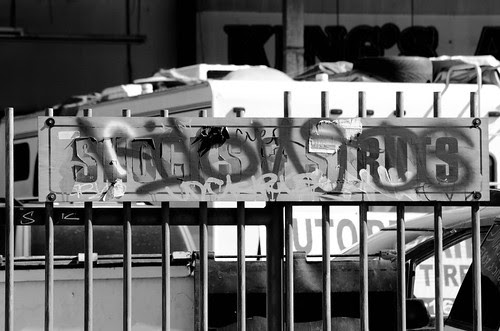 I took a break from work to grab a quick lunch and practice a steady hand-held shot. I picked a target and fired bursts of five shots each. the goal was to produce same image each time. I would stop at a traffic light, point, and then shoot five shots. My subjects were boring, but that was not important. I wanted five shots without movement. In this case, I was 4 of 5. The first shot was significantly different than the last four. Most other shots were a mixed result.

Acquiring this this skill will help when I try to capture handheld HDR shots. I’ve ruined countless attempted HDR shots so far. To improve, all I need do is practice. It works for everything.

Email ThisBlogThis!Share to TwitterShare to FacebookShare to Pinterest
Labels: Photography

years ago I was taught to inhale deep breath (a deep gasp then freeze) then take shots...it helped to keep camera stable and avoid jittery shots.

worked to get better pics and save $$ on film before the luxury of digital cams.

I still use the technique with digital cams since some moments are so fleeting in able to grab the interesting shot.

That is a pretty cool shot. I have been working on my photography too, but I am still just working on getting the right angle, and lighting with my point and shoot camera. One day I will take a photography class and get a SLR camera, but I want to get good at the basics before I spend a bunch of money.

@anonymous Thanks for the tip.

I have uploaded some of my photos to a Flickr account. Do you have an email address I can send a link to? I'd also be happy to share my email address if you don't want to post yours.

My father was fond of the dictum that practice makes perfect. Nice to see it being applied in the realm of photography