ARCO pisses me off 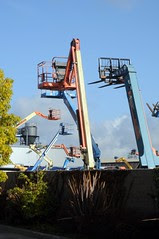 I made an early trip to knock off a few errands this morning. Nothing big, I just dropped of the holiday cards at the post office and filled up the tank on my truck. I took my camera with me as I always do.

While pumping gas at the ARCO on Valley View and Alondra in La Mirada, I took a few pictures of the vista shown in the picture to the left. I say a few pictures because I was having trouble with my camera. Nothing was working. All the pictures were out of focus. While I worked on the problem a female employee walked toward me from the store. She yelled, “You can’t take pictures here”.

I thought that odd since there were no signs telling me I could not take pictures, which is usually the case. I replied with, “I thought I could take pictures here.” I raised the camera and took my last picture, which is the only one of the batch in focus.  She reacted by yelling something I could not hear and ran back into the store. As I pulled out, I could see her inside on the phone giving me the stink eye. I think she called the cops.

My questions are always the same. What does it matter what I shoot with my camera? Why do people care? I would understand if the gas station was manufacturing some proprietary product, but it sells gas, which is about as ubiquitous as it gets. Photography is not a crime, especially my photography. It’s not even any good.

ARCO, I feed you $50 or $60 bucks a week. If you don’t want my money, just keep sending angry store clerks out to yell at me for trivial reasons. Oh, and then call the cops on me. That works too.

Here is a Google Street View of the gas station. It’s pretty unremarkable. I was at the pumps on the right shooting the construction high lifts on the adjacent property. I’m such a criminal.